Along with your birthday, the other day you get to celebrate is your onomastico, or ‘name day’.

The word comes from the Greek ónoma, ‘name’, and it’s technically an adjective that roughly means ‘related to a name or naming’.

Italians use it to refer to your giorno onomastico, ‘name day’, which most people cut down to simply l’onomastico.

And today is actually my name day!

Buon onomastico! Auguri per l’onomastico!
Happy name day! Best wishes on your name day! Are a few ways to mark the day.

All three archangels (Michael, Gabriel and Raphael) are now venerated in a common feast on September 29, which used to be St. Michael’s feast alone. “MI-CA-EL” means “Who is like to God?” 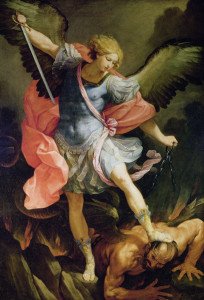 Such was the cry of the great archangel when he smote the rebel Lucifer in the conflict of the heavenly hosts, and from that hour he has been known as “Michael,” the captain of the armies of God, the type of divine fortitude, the champion of every faithful soul in strife with the powers of evil.